The Story Behind DHC's Conference Rooms

In our office, we have a lot of outdoor enthusiasts and animal lovers. In that spirit, all of the DeLoach, Hofstra & Cavonis, P.A. (DHC), and Seminole Title Company (STC) conference room names were inspired by Florida's beautiful coastal and wetland birds.

A symbol of America, the Eagle Room was inspired by the firm’s steadfast patriotism and one of Dennis R. DeLoach Jr.’s favorite birds. He has two eagles, Molly and Mason, that regularly perch next to his home in Homosassa that he enjoys watching.

Amongst other historical Americana-themed pieces, this room includes a reproduction of the 1820 print by American artist John Trumbell's "The Declaration of Independence." It depicts the presentation of the Declaration of Independence to Congress leading to the founding of the United States of America on July 4, 1776. Trumbull's original painting is on display in the Rotunda of the U.S. Capitol Building. Fun fact: this same image is on the back of the $2 bill. 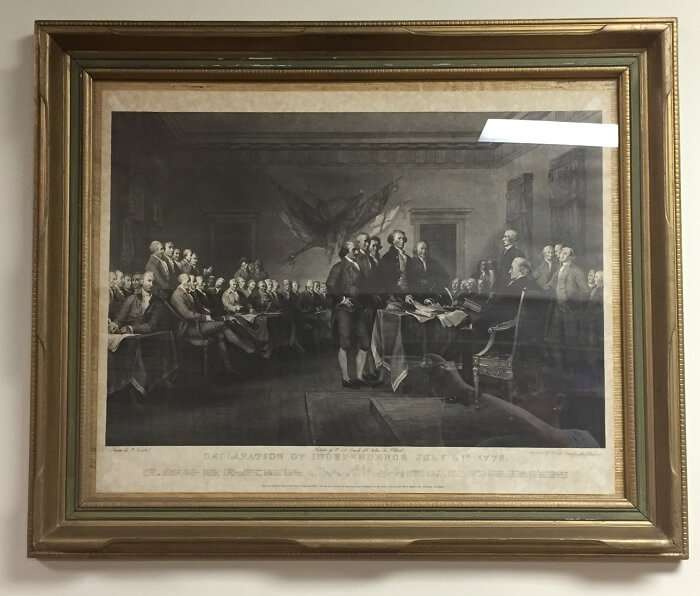 Also in this room is a small table that pays tribute to the founding of the law firm 200 years later on October 1, 1976. This was Mr. DeLoach’s first conference table where many clients have gathered seeking legal guidance over the many years.

The Egret Room is named after the white egret “Big Bird” which used to frequent Paul Cavonis' family yard for tasty treats and a safe refuge. 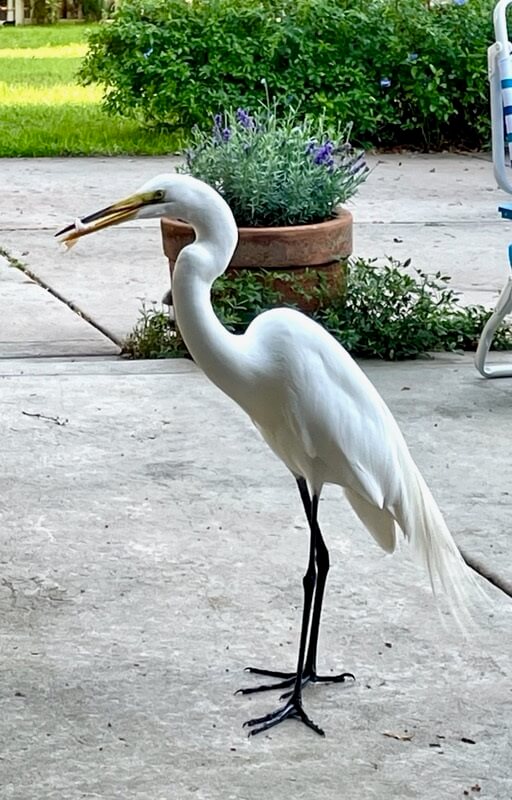 The Egret Room displays several black and white photographs by the artist Clyde Butcher who is well known for his wilderness photography of the Florida landscape. In 2006, the law firm was a sponsor of the Clyde Butcher: The American Wilderness exhibition at Gulf Coast Museum of Art formerly located in Largo. 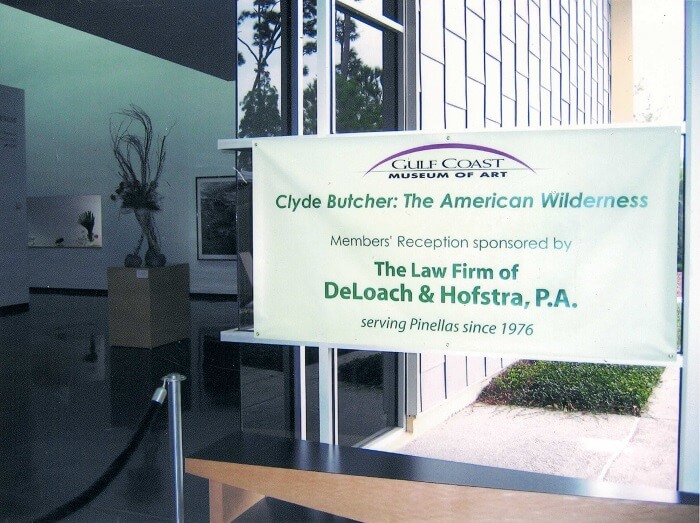 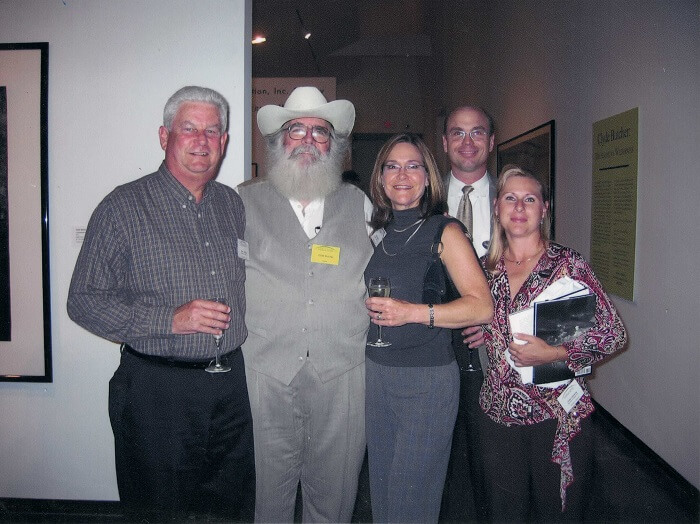 The Spoonbill Room was named after D. "Rep" DeLoach III’s favorite Florida bird, the roseate spoonbill. Very common in parts of the southeast until the 1860s, spoonbills were virtually eliminated from the United States as a side-effect of the destruction of wader colonies by plume hunters. For those who know Rep, know he is a passionate animal advocate, and the spoonbill is one of his beloved birds for its uniqueness and beauty—especially in flight. Spoonbills mate for life so you’ll often see them in pairs.

Displayed in the Spoonbill Room is an early childhood portrait (circa 1978) of Rep with his two older sisters, Julie and Susan, who also grew up playing and helping out at the firm.

Also on display is an original will of a Mr. John Bates from Norwich, England in 1854. This was gifted to Rep from his client and descendant of Mr. Bates. This is an example of a holographic will, or olographic testament, which is a will and testament that has been entirely handwritten and signed by the testator. Thank goodness for computers, we could not imagine the attorneys having to handwrite every will or trust!

The Heron Room was named after Dennis R. DeLoach Jr.’s. other favorite bird, the white heron. He also has a heron, Henrietta, that regularly visits his lawn in Homosassa for tasty treats.

Displayed in the Heron Room are Mr. DeLoach’s treasured ancestral photos and documents. The photos include a portrait of his parents who were also early benefactors of the firm in 1976. Dennis lovingly recalls, “I borrowed $10,000 from Community Bank and Mother and Dad gave me $7,000, and we rented IBM typewriters for $18/month and we were on our way.” This room pays tribute to Dennis' love of family, his roots in Statesboro (GA), and his parents who helped him get the firm started. 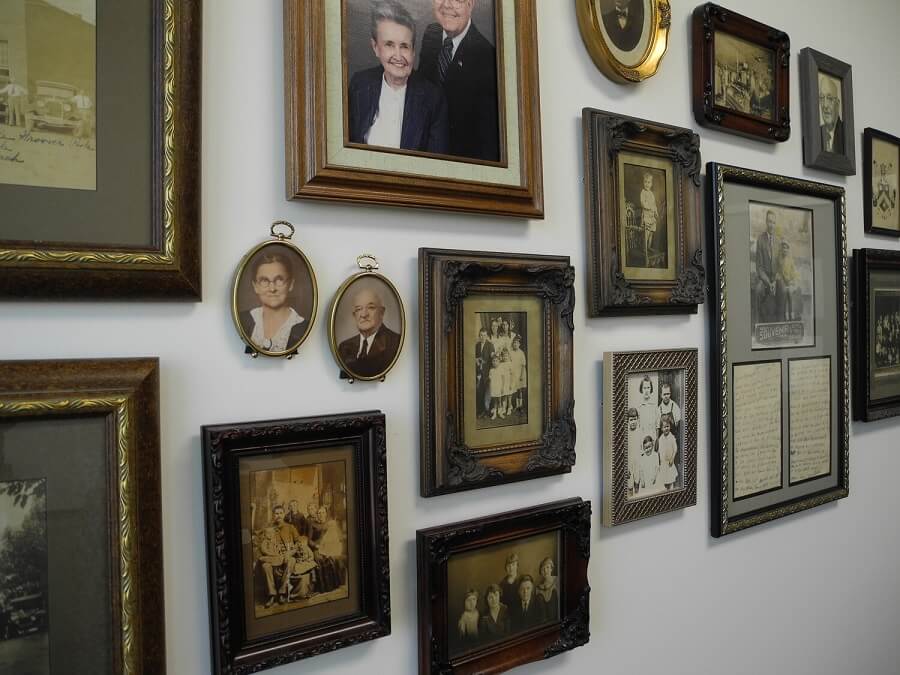 The DeLoach family legacy lives on and Mr. DeLoach practices with his son, D. “Rep” DeLoach III who practices in the areas of elder law and estate planning. His daughter-in-law, Simone DeLoach, is the law firm and title company’s Director of Marketing.

The Pelican Room is named after the ancient-looking bird that is often seen soaring the sky around the local beaches and piers looking for its next meal. As the famous limerick by Dixon Lanier Merritt goes “A wonderful bird is the peli-can, his bill will hold more than his beli-can.”

During the real estate development boom of the beaches and surrounding areas, both Dennis R. DeLoach Jr. and Peter T. Hofstra practiced in the area of real estate and were very successful. This new demand led to them forming Seminole Title Company in 1993. 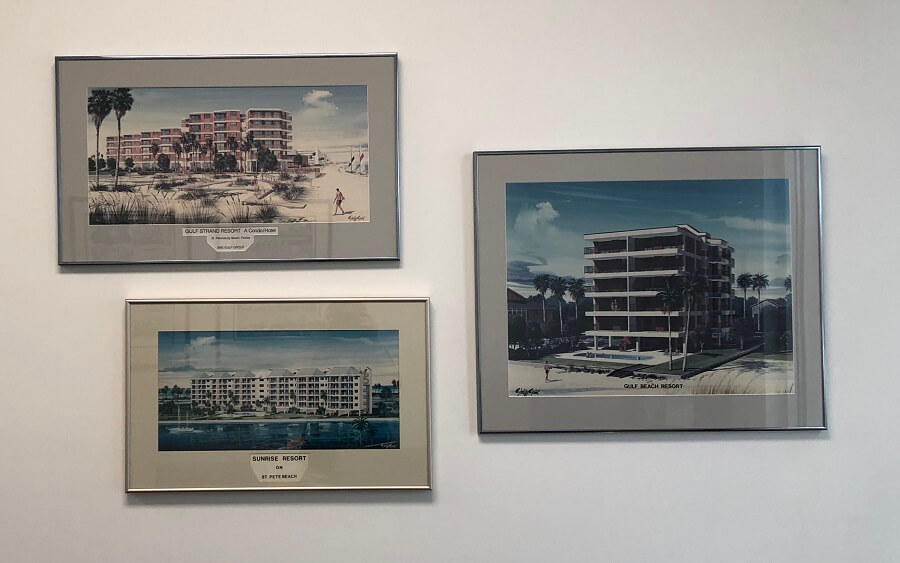 Hung in this room are prints of St. Pete Beach developments where Peter Hofstra assisted several different developers and did the condominium work. Seminole Title Company was the exclusive closing agent for the developers on these St. Pete Beach properties on display: Sunrise Resort (5445 Gulf Boulevard), Gulf Strand Resort (4510 Gulf Boulevard), and Gulf Beach Resort (140 51st Avenue). These are just a few examples of the many condominium projects they worked on.

Crane I and II

Crane I and II are two adjoined conference rooms named after the sandhill crane. This beautiful bird is easily identified in flight as it can be seen flying with its neck stretched out completely. Florida sandhill cranes inhabit freshwater marshes and can often be seen in Fort DeSoto.

Crane I displays two legal prints, "The Deed to the Farm" by Louis Moeller c.1909 and a reproduction of  "The Country Attorney and His Clients" by Hans Holbein the Younger c. 1764.

Crane II displays a print of the "Coastal and Wetland Birds of Florida" which includes images of all of the birds which inspired the names for the conference rooms.

The large seminar room was named the Flamingo Room for the fun that awaits. Folks will "flock" to this room for estate planning and long-term care seminars by Rep DeLoach; "Title Talks" for real estate professionals hosted by the title company; staff celebrations, community events and so much more.

Exhibited in this room are some historical memorabilia of the firm and the city of Seminole, a display of the firm's longtime community involvement, and professional recognition.

The Osprey Room is our grandest conference room "perched" on the 2nd floor--hence the name. Views of Lake Seminole and Seminole Boulevard can be seen from the large picture window. This room houses all of the firm's Florida Statues going back to 1975 when Mr. DeLoach founded the firm. It is a special visual representation of our history and there are several shelves purposely left open for future growth in the years to come.

If you would like to learn more about our conference rooms and see our new building, signup for an office tour and we will gladly show you around.