Incapacity Planning: Preparing for the Future

Free Living Will and Designation of Healthcare SurrogateRequest Information

Your Separate Writing:
Gifts of Tangible Personal Property in your Last Will and TestamentRequest Information 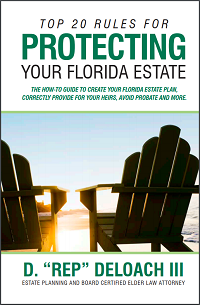 Rep: We think about dealing with your aging parent and the aging parent should go see a good attorney and the attorney's going to draw up a number of different things. They're going to look at their estate planning side of things. The estate planning side is what if they died. So should they have a will or should they have a trust, a living trust in order to avoid probate.

In a typical scenario someone's going to come to the attorney, preferably in their sixties and seventies, to get these things done. You're preparing for the future. And it's going to be their level of comfort is do they want to include their children in the conversation at that time.

These are not always easy conversations to have with your family members. What would you want at end of life? But that's the concept of if you go see an attorney, then you would likely want to discuss, or you not likely, you'd really want to discuss these things with your children. If you became incapacitated, who would make your financial decisions? So you'd want to ask that person if they could do it.

If you became incapacitated, who would make your healthcare decisions? And you'd obviously want to ask them and then you also want to make sure that they would follow your wishes. Sometimes the children say, "I could never pull the plug on my mom. I would never be able to remove life support." Well that wouldn't be a good person to be your health care surrogate.

For instance, mom says, "Well, I saw my father die of cancer and I certainly wouldn't want that to happen to me," or, "I saw my husband die and he was in a vegetative state," or, "He was on a breathing machine. He had a tube feeding him. I know I wouldn't want that to happen." So it's important to have it in writing and then communicate that to the family, but it's also just important to have the conversation with the family in the first place. And people don't always do that.