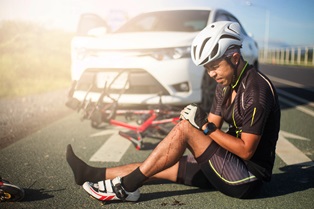 Bicycle riders and drivers are both expected to share the road safely, but cyclists are at a significant disadvantage in the event of an accident.

Colliding with a larger and heavier vehicle, capable of three times the speed of a pedal-powered machine, often leaves bikers with catastrophic injuries or permanent disabilities.

Identifying the most common reasons these accidents occur can help cyclists avoid a crash before it happens, and help drivers realize the behaviors that put others at risk.

When Are Drivers Most Likely to Strike Bicyclists on the Road?

Thousands of cyclists suffer injuries in road accidents each year, and many lose their lives as a result of collisions with passenger cars. While cyclists may share liability in some of these crashes, driver error is overwhelmingly reported as a factor in car-bike crashes.

Driver negligence takes many forms, but the most frequent mistakes include:

If you were hit by a car while riding a bicycle, we can get you the compensation you deserve for medical bills, lost wages, and pain and suffering—and we don't collect any fees until your case is won. Simply fill out the quick contact form on this page to set up your consultation.