Our Own Brush with George H. W. Bush

One of the thing I love most as an estate planning and elder law attorney is getting to help people and learn about their life experiences. I never know who I am going to get to work with, who is going to come in and sit across from me, and how I can learn from them. I have been fortunate enough to help so many interesting people, from Fortune 500 executives, retired scientists and engineers, world travelers, and U.S. military veterans. The death of Former President George H.W. Bush brought to mind another client we helped as part of our estate planning and elder law practice.

I had worked with "Jack" for years as his estate planning attorney. He had some difficult times as he was aging and was a target for elder and financial abuse as he was getting more forgetful. Jack was a pretty tough guy, very opinionated, and it was only after working with him for years did his son tell me that Jack had served with George H.W. Bush in World War II. In fact, Jack and the former president were the only two surviving members of his World War II air squadron. After Jack had fallen and went to the hospital, he received the following letter from his former squadron member, Mr. Bush: 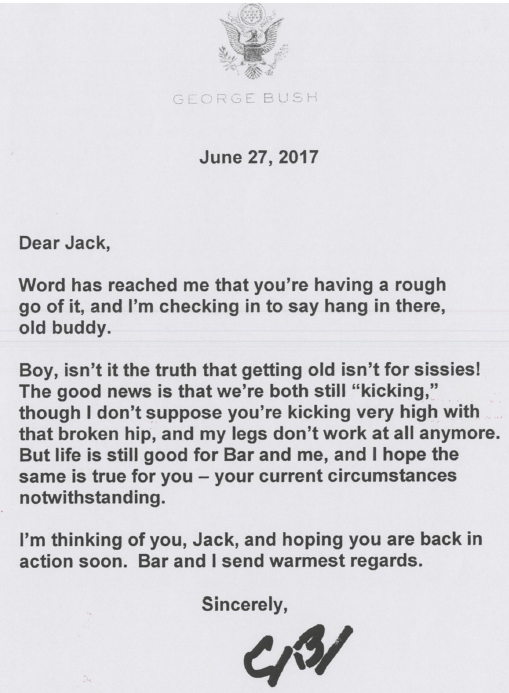 Rereading this letter now still gives me the chills. Here I was reading a letter from our former president to our client that we were helping. There was no way for me to ever know what Jack and Mr. Bush went through in War War II, but here was a sense of the camaraderie they must have shared in serving our country. Also, this was just a great example of letter writing from a legendary person, one who helped shape world events, lived through and changed history, and was renowned as a great American and a great person on both sides of the political aisle. Mr. Bush had many health issues as he aged, but he certainly had a way with words in this concise, personal, and witty letter.

Jack passed away in November 2017, leaving Mr. Bush the sole surviving member of his World War II fighter squadron until his death on November 30, 2018. Our condolences go out to the Bush family in this difficult time as our nation mourns the loss of our 41st president.