When does a family member have grounds for contesting a will? 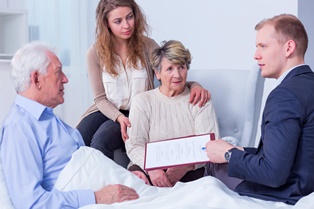 In Florida, there are only a handful of legal reasons for contesting a will. If the will was created voluntarily by a person of sound mind and in accordance with state law, you may not have any legal basis for challenging it.

However, if you do have a valid claim, you should know that only certain parties can challenge the terms of a last will and testament in court.

Who Can Contest a Will in Florida?

In the Sunshine State, people who can challenge the terms of a will include:

As the person bringing forth the will contest, you have the burden of proof in the case. This can be difficult, especially if you don't have explicit medical proof of incompetence or other evidence of fraud. We can help you gather evidence to establish that the will isn't valid, allowing you to collect what's rightfully yours.

The estate litigation attorneys at DeLoach, Hofstra & Cavonis can meet with you to discuss your legal concerns and help fight for what you deserve. Simply fill out the quick contact form on this page to set up a consultation and get answers to your questions.