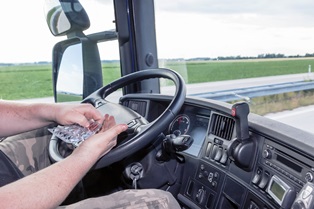 Truckers have some of the hardest jobs in the nation, and long hours behind the wheel can take a mental and physical toll on long-haul drivers.

Truckers who are paid by the load, or who are under pressure from their employers to meet tight deadlines, are placed in an almost impossible dilemma: lose your job, or put other people on the road at risk.

Unfortunately, many truckers continue to turn to drugs to cope with the strain of their jobs—and drug use is a common truck accident factor in tens of thousands of crashes per year.

How Legal and Illegal Substances Affect a Trucker’s Driving Ability

In a recent study published in Occupational and Environmental Medicine, researchers discovered that overall use of substances that can affect driver action was high among a range of truckers; and higher incidence of drug use was found in companies with poor working conditions.

Researchers asked truckers to respond to a survey about their drug use: roughly half of the total respondents admitted to drinking while driving; and 30 percent admitted to using amphetamines. This study relied only on a driver’s own admission of drug use. There are still relatively few scientific reports on the subject.

Drugs that truckers commonly take before and during shifts include:

Trucking Companies Have Little Incentive to Take Action on Drugs

Unfortunately, the trucking company conditions that encourage drug use are unlikely to change. Carriers are in business to protect profits at any cost. If a company rep suspects a driver will fail a drug test, he may simply “forget” to perform testing on that operator for several days until the drugs are out of the driver’s system. Fines for failing to perform timely drug testing are often extremely low, and the carrier would much rather pay a small fine than provide evidence that could cost the company hundreds of thousands in losses.

An ability to think like a trucking company representative is one of the biggest benefits of having an experienced attorney by your side throughout your injury case. Our Seminole truck accident lawyer can perform an investigation for trucker drug use, identify other forms of negligence on behalf of the driver or the trucking company, and ensure that all evidence in your case is collected and preserved for the judge. Fill out the contact form on this page today to make an appointment for a consultation in our offices.