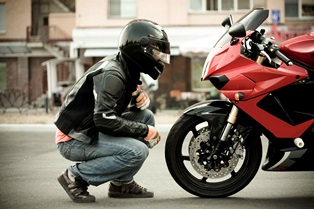 As an avid motorcycle rider, you probably know the majority of deadly motorcycle crashes are caused by drivers of passenger cars. However, what you may not know is there are many other factors that influence whether you'll be involved in a crash—and whether you'll walk away from the collision.

We've examined some recent statistics to help riders understand the risks, enabling them to prevent an accident before it occurs.

A recent motorcycle safety report from the National Highway Traffic Safety Administration (NHTSA) revealed some disturbing trends about motorcycle accidents and riders. Per mile traveled in 2015, motorcyclists died in accidents at 29 times the rate of people in passenger cars—with a total of 4,976 motorcyclists killed in road accidents.

Some of the biggest factors involved in motorcyclist injuries and fatalities included:

Our attorney Paul Cavonis isn't just a motorcycle accident attorney. He's an avid and passionate rider who knows what it's like to share the road with larger vehicles. He understands the skills and control needed to operate a motorcycle safely and is dedicated to protecting the rights of injured motorcyclists who suffered an injury due to someone else’s negligence.

Our law firm will fight for the maximum amount of compensation available in your injury case, and we don't collect any payment from you until the case is won. Simply fill out the quick contact form on this page to set up a consultation with our motorcycle accident team.