How Drivers Cause Motorcycle Accidents on Florida Roads 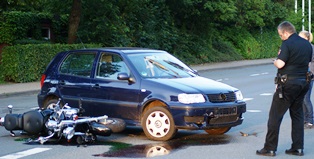 Motorcycle riders have to go through rigorous training and licensing requirements in order to ride on Florida roads.

Unfortunately, they still have to share these roads with drivers who may not be doing their due diligence to avoid an accident.

Year after year, motorcyclists are killed by drivers in completely preventable accidents—and most of these accidents happen under the same set of circumstances.

5 Most Common Types of Motorcycle-Car Accidents on Florida Roads

Drivers have a duty to drive in a reasonably safe manner. This means they must be cautious of pedestrians, bicyclists, and motorcycle riders, as these victims often suffer severe head trauma or even fatal injuries, when hit by a motor vehicle. In addition to wearing high-visibility clothing and a well-fitting helmet, bikers should be aware of driving situations that are most likely to lead to a crash.

The most common types of driver-rider motorcycle accidents include:

Motorcyclists injured by cars should always seek the advice of an experienced injury attorney as soon as possible after a crash. The injury cost to victims and their families may quickly rise to thousands of dollars, and an attorney can determine whether they can help them collect compensation for their losses.

In addition, an attorney can work quickly on your behalf to gather evidence of the driver’s negligence.

The duty to avoid a motorcycle accident should be placed on all road users, not just motorcyclists. Despite numerous road-sharing campaigns, drivers are still overwhelmingly at fault for causing accidents and serious injuries to motorcyclists.

If you're suffering after a motorcycle crash, our legal team can take over your case, to get the maximum compensation, while you take the time you need to heal. Simply fill out the form on this page today to make an appointment in our offices.