Fatigued Drivers Can Cause Devastating Accidents on Florida Roads 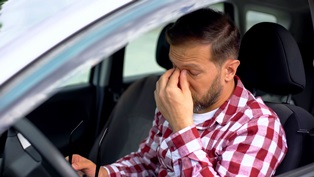 Dozing off while driving is a terrifying prospect, but the truth is that fatigue can be deadly even if you don’t fall asleep at the wheel. Several studies that compare the effects of drowsiness to intoxication have found that that drivers’ attention spans, decision-making skills, and reaction times are all affected similarly by lack of sleep as they are to alcohol.

While it's not a crime to drive while drowsy, tired drivers may be just as likely to cause accidents as drunk drivers—and they can also be held liable for their actions in an injury lawsuit.

Drowsy driving is a factor in thousands of accidents in the U.S. each year. A recent report from the AAA Foundation for Traffic Safety found that people who sleep only six or seven hours a night are twice as likely to be involved in a collision as those who sleep eight hours or more. Another study estimates that 1 in every 25 adult drivers falls asleep while driving at least once a month.

Drowsy driving risks only increase for drivers who:

Signs a Driver May Have Fallen Asleep Before a Crash

Victims have the right to collect payment for their medical expenses, lost income, out-of-pocket costs, and pain and suffering after another driver’s negligence causes an accident. While driving fatigued is a form of negligence, an individual will likely deny they were too tired to drive safely, and it will be up to you to prove that a reasonable driver wouldn't have gotten behind the wheel in that condition.

If you suspect that the person who struck you was too sleepy to drive safely, look for these common signs of drowsy driving after a crash:

Our experienced personal injury attorney knows how to gather evidence to prove that an at-fault driver was drowsy, asleep at the wheel, or otherwise negligent in a crash. We also represent injury clients on a contingency-fee basis, fighting for the maximum amount of compensation available without collecting anything from you until your case is won. Simply fill out the quick contact form on this page to set up a consultation with our car accident team.