Little by little Clive noticed his wife’s memory disappearing. Each month, it became a little worse. Clive was worried.

Clive, a retired school teacher, and his wife had moved from New York to Seminole.

“My wife needs to go into some kind of care. I don’t know where you go. I don’t know how it works. I don’t know what it costs,” he recalled thinking. Clive knew he needed help. That’s when he met with attorney Rep DeLoach and his Life Care Planning team. 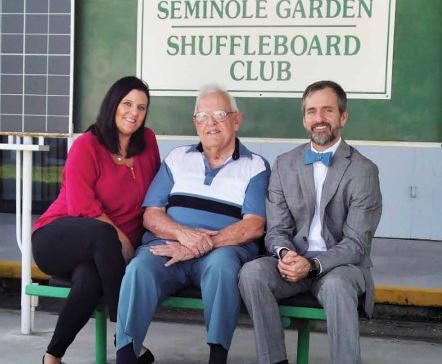 Rep arranged everything with an assisted living facility, but within two months Clive’s wife fell and was rushed to the hospital with broken ribs. The doctors said she could not go back to assisted living. It had to be a nursing home.

“There, again, was it up to me to look for a nursing home?” thought Clive. “No, Rep had it already lined up. And three days before Christmas, I was able to drive into the private entrance of a facility at 10:30 at night. Then out came two aides to help pick her up out of my car and carry her in.”

“Within a day or two after admitting her, Rep had a gentleman come into my home, sit down with me, and work through all the paperwork so her care would be covered by insurance, because the nursing home, frankly, would’ve had me bankrupt in a year and a half,” Clive declared.

“I met with Rep to go over some other things,” Clive continued, “and he said to me, Clive, I want you to take this form and go to the VA immediately.”

About 18 months later Clive discovered there was $15,200 in his checking account from the VA. The VA then detailed how much he would receive each month, tax-free.

Over the past ten years, Clive has accumulated approximately $77,200 from the VA. “I would have never had that money if I hadn’t gone to an attorney who knew what he was doing and how to do it. And that assistance was fantastic,” Clive gratefully recounted.

Sadly, Clive’s wife recently passed, but he feels it was a blessing because of her fully developed Alzheimer’s. With Rep and his team’s help, Clive knows he did the best he could for the woman he loved. Now, at 84, he’s looking forward to continuing on with his life with a “bucket list’’ trip to Alaska.

“Rep was there and he took care of everything for me,” said Clive. “But he also gave me something that probably was much more valuable than anything else—Rep DeLoach has given me a whole new life.”

VA Pension benefits can be extremely helpful to pay for long-term care for a veteran who served in wartime and their surviving spouse. Here’s how the pension program can help you and your family.

The veteran must have: (1) served at least 90 days of active duty (at least one day in war time); (2) been discharged (except dishonorably); and (3) high enough recurring medical costs and financially qualify.

How much will Pension pay?

Pension benefits can provide a cash payment of up to $2,230/month for a married veteran, $1,827/month for a single veteran, and up to $1,209/month for the surviving spouse of a wartime veteran.

Are there limits to income and assets?

The veteran or surviving spouse may own a home and only have assets less than $126,000 (cash, stocks, etc.). There is also an income limit based on out of pocket medical costs, typically for assisted living and in-home care. If you need help for yourself or your spouse, please visit our website or attend one of our free monthly seminars discussing payment for long-term care.​

by Simone B. DeLoach
Connect with me
Director of Marketing